I don’t remember how I found this, and I don’t know who this guy is, but I just read this very interesting blog post, posted 12/7/2011. as to why the archaeologist wouldn’t have wanted to go into what wiped out the cities being excavated, it helps to know that the Society of Biblical Literature includes many scholars who are not believers, and may even be skeptical about if the Bible is true at all…which makes the final bit of information in the post that much more interesting… 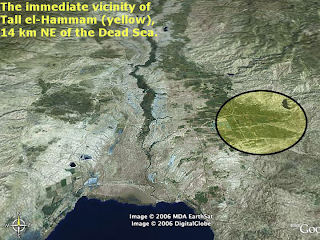 By far the most interesting session at the recent Society of Biblical Literature Congress in San Francisco was one I wandered into by chance.  I am always curious about what is going on in biblical archeology, so one afternoon I decided to skip the dozen or so sessions dedicated to Bakhtinian Decontextualization of Identity Construction in Persian Yehud (I had to tear myself away) and go hear about the excavations at a certain site called “Tall-el-Hammam.”  I had no idea what I was in for.
After about five minutes into the session, I realized that the archeological team assigned to this dig was convinced that they had found the biblical Sodom and Gomorrah.  After another half-hour, it seemed they had most of the participants convinced as well.  The sites fit the geographical and temporal context into which Sodom and Gomorrah are placed in the biblical texts.  The cities at the site were suddenly and completely wiped out in the Late Bronze Age, which makes a reasonably good fit with the biblical accounts of Abraham and Lot.  The entire presentation was very convincing, but never once did they deal with the “elephant in the room”: what caused the sites to be suddenly abandoned?  As soon as the session was over, I was the first to raise my hand.  “Did you find any arrow heads?  Signs of invasion?  What happened to them?”  The lead archeologist paused for a moment.  “I didn’t want to go there,” he said.  Another pause. “I’m preparing material for publication.”  Pause.
“All I want to say ‘on camera’ is, they appear to have been wiped out in a ‘heat event’.”

“If you want to know more, I’ll talk after the session off the record.”

I wish I could divulge what he said to a small group of us clustered around the podium after the session was over, but it would break confidence.  We’ll have to wait for the official peer-reviewed publications.